16 Apr 2019
One major event was held in Los Angeles, California 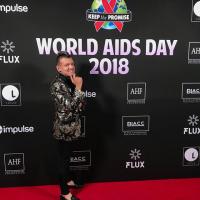 (EMAILWIRE.COM, April 16, 2019 ) AIDS Healthcare Foundation (AHF), the largest global AIDS organization, recently held a variety of community events and formal observations in many of the 42 countries around the globe that AHF serves.

Under its “Keep the Promise on HIV/AIDS!” banner, AHF celebrated and acknowledged progress made in the fight against HIV and AIDS. These AHF World AIDS Day events also serve as a reminder to world leaders that with almost one million deaths and nearly two million new infections occurring last year alone, there is still much work to be done in the global fight to defeat the epidemic.

In the U.S., AHF was host to four high profile events in New York City, Chicago, Miami, and Los Angeles along with numerous smaller gatherings and commemorations. The LA event was held at Hollywood nightclub, Boulevard 3, on Sunset Boulevard. It featured an all women lineup of entertainers hosted by Rocsi Diaz with musical performances by the artists Monica, Chesca and DJ-ing by Carisma.

AHF was on hand at many of the events to provide free HIV testing services, distribute free condoms and hold interactive sessions to raise awareness of HIV/AIDS and related issues at multiple locations throughout Africa, Asia, Latin America, the Caribbean, Europe and the U.S.

While millions of people today are accessing lifesaving antiretroviral therapy, millions more still desperately need it. The end of the epidemic is only possible if governments and world leaders Keep the Promise on AIDS.

Step and Repeat LA is a company that is ready to provide whatever is needed for red-carpet events. No job is too small or too big for this leading LA area backdrop company. Also, well known throughout the country, this experienced company is readily available to discuss a customer’s needs for personal events such as birthdays and weddings as well as large corporate events, charity fundraisers, and special events like World AIDS Day. Step and Repeat LA created a 50' media wall at the Hollywood Palladium for this incredible charity event. (EMAILWIRE.COM,... The gala honored Suzy Amis Cameron for her work with Red Carpet Green Dress. The event attracted the likes of many...